Written down by Sabine Smyth from notes after visit to Migrant Camp Exhibition Opening March 8th 2015, with wife Sandra (Sandy)

During the flight from Estonia my mother got separated from my father. We didn’t know that he was actually alive for many years, then found out he had been taken to Sweden and had a new family.

My mother arrived in Australia as a single parent in 1955 and befriended local farmers by the name of Sherwood. They were kind and took us camping in Bright, and for visits to their farm.

Only three or four other Estonian families were at the camp and we grouped up and become friends.

As kids we played dangerously – we played in the wood heap and I used to jump from the tops of the cypress trees that grew along the mess hall.

We were not allowed to speak a foreign language on the school grounds – we would get detention.

We have a photo of us all coming off the ship at Station Pier – it was on the front cover of The Age for the 50 years anniversary since the beginning of migration.

This story was then emailed to Sabine Smyth in April 2020 by Arved Matt:

Adele Matt and two sons, Sulev and Arved, emigrated as WW2 refugees from Germany to Melbourne in 1949, and were settled in Benalla Migrant Camp after a short stay at Bonegilla Migrant Camp.

Towards the end of WW2, Estonia was under German control, and in September 1944, as the Russians were closing in driving out the Germans from the Baltic States, Estonians were trying to escape, many across the Baltic Sea to Sweden.

Aleksander Matt, who had been conscripted into the German forces, escaped and fled home to Saaremaa, and then to Sweden in a small fishing vessel, together with other men and boys who were in danger of being killed by the Russians. The women and children were to escape also in following days. Adele Matt, with son Sulev, and pregnant with Arved, was about to board a boat to Sweden when the Germans rounded them all up and sent them to Germany, together with the retreating German forces.

Adele and Sulev, together with many others, just avoided the Russian invasion of Estonia by hours. Many who could not escape were captured, emprisoned or killed by the Russian forces.

After the “liberation” by the lesser evil Germans, Adele and Sulev were settled in Oldenburg Refugeee camp. Arved was born in Verden during this period. Adele and Aleksander were separated by the turmoils of war and the aftermath. The horrors of the occupation by Russians, Germans, and then Russians again, were too difficult to talk about by most refugees, but we found out years later that Aleksander had escaped to Sweden and had settled down with a new family.

1949 there were mass emigrations of refugees to all corners of the world, but Adele chose Melbourne Australia as it was the furthest she could get from the horrors of war.

Adele, Sulev and Arved landed in Melbourne in September 1949, transitioned through Bonegilla to Benalla Migrant Camp, where they lived in relative luxury until 1955 when Adele remarried and settled in Wandin North.

We all made good friends in the Benalla camp, Adele worked as a machinist at Latoof and Calill, leaving Sulev (and less so Arved) to terrorise the rest of the camp.

School was complicated for the children, a mixture of ages, ethnicities and languages, and none able to speak English, initially. Somehow we all managed to integrate, communicating in a smattering of Estonian, Latvian, German, Polish, etc, and increasingly in English. Speaking English was compulsory at school, otherwise they got detention.

We as kids had a great deal of freedom, or we thought we did until we were caught by the teachers or the “Dicke Politsei”, and sometimes even our parents.

(The “Dicke Politsei” was not an actual policemen, but an officious security guard who was not keen on kids. He often chastised kids for loitering, screaming at them, thus making no friends with kids who called him names, including Dicke Politsei. )

The parents and children often walked to Benalla Township to shop, or enjoy the gardens and swimming holes in the Broken River. It was great fun and a wonderful atmosphere to grow up in.

We made friends with a wonderful farming family, the Sherwills, who had a farm just outside of Benalla. They often took our family and friends to their farm to play with the animals, and they also drove us camping to Bright. It was great to have local friends outside of the camp to provide a change of scenery and appreciation of the Aussie lifestyle outside the camp.

There were many activities and games that children got involved in, some rather risky but entertaining. Some examples are described below:

The kids used to build cubby houses in adjoining properties, and had to scavenge for materials to make them as comfortable as possible. Residents used to get the old potato sacks from the canteen and used them as doormats.

Belated apologies to the mothers who lost their doormats during a scavenge-hunt (as distinct from “robbery”) for cubby house materials.

The “Dicke Politsei” were on the case, but never found the culprits.

Climbing cypress hedges, swinging down on the branches. This activity caused a camp-wide blackout when one boy landed and released the branch, which whipped up into the power lines causing a short – circuit and blowing the transformer. Sulev and 2 or 3 others were still up in the tree when it happened (so it wasn’t Sulev’s fault).

TAA and ANA regularly used the Benalla Airport, and we were fascinated by the planes landing and taking off, especially at night with all the flashing lights. TAA had an Open Day and they welcomed children aboard showing us the controls, etc.

A group of kids embarked on a ship building exercise, building a canoe from “salvaged” corrugated iron and timber, and “salvaged” pieces of bitumen from the road pavement, which was melted and used to patch the nail-holes and seams of the canoe. It was panel-beaten into shape to hold one kid and launched in the Broken River.

The stability calculations by the “engineers” were apparently awry and it capsized in no time on its maiden voyage, and we believe the remains still rest at the bottom of Broken River.

Maybe a ‘Winged Keel” would have been handy, but it had not been invented then.

Tarzan Swings. A popular summer activity was swinging down from a tree on a rope swing and jumping off into the river. The rope had knots in it for grip, a loop for foothold, or a stick tied to it like a trapeze.

The Tarzan Pool was in the Broken River, near the Monash Bridge in the town. The other pool near the water tower on cnr Tower and Riverview Roads, was a shorter walk from the camp but was smaller, and used only by the “little” kids.

Leeches in the Swimming holes: It was very common to be attacked by leeches when in the swimming holes. Our legs and bodies often had leeches attached. Some merely swiped them off, but the best way was to insert small twigs in the tail and turn them inside out to see the blood that they had sucked out of you.

In 1954 the school took us to Benalla to see Queen Elizabeth on her Australian Coronation Tour. “I did but see her passing by….”, as did Sir Robert Menzies, and, unlike Paul Keating, no gentle pat on the bum.

Peeping Toms. Not appreciated by women of the camp, was the practice of older boys peeping through the nail holes of the shower block walls. The women knew and plugged the holes with toilet paper, but the boys easily pushed out the plugs. A constant battle.

The Camp dentist, one of the residents in the Camp, operated the Camp Dental Service. Sulev went once, but feeling brutalised refused to go again, hiding under the Nissan huts.

Playing “Chasey”, a popular game at the camp. When playing at dusk, Arved was called home by his mum, but he ran away straight into a very low barbed wire fence put up to keep people off an area. He received gashes to the knee and legs, and the scars are still very prominent today.

Broken River floods circa 1954, spread right up to the outskirts of the camp. Many kids excitedly waded through knee deep water to town, against a strong current. 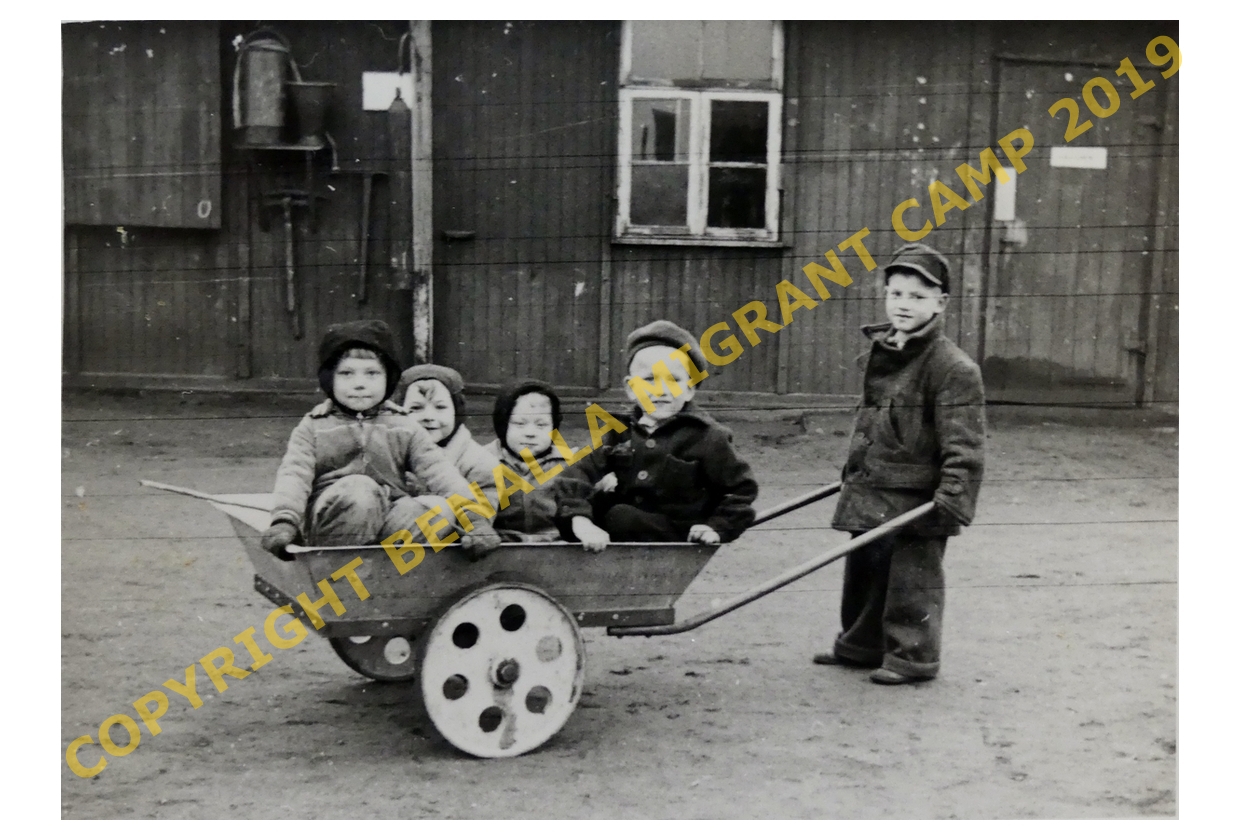 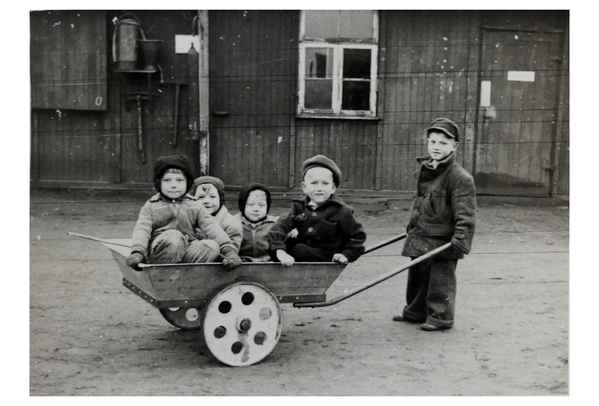 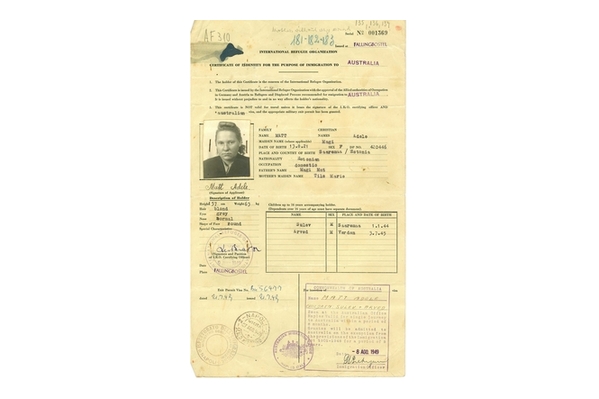 Other families from Estonia