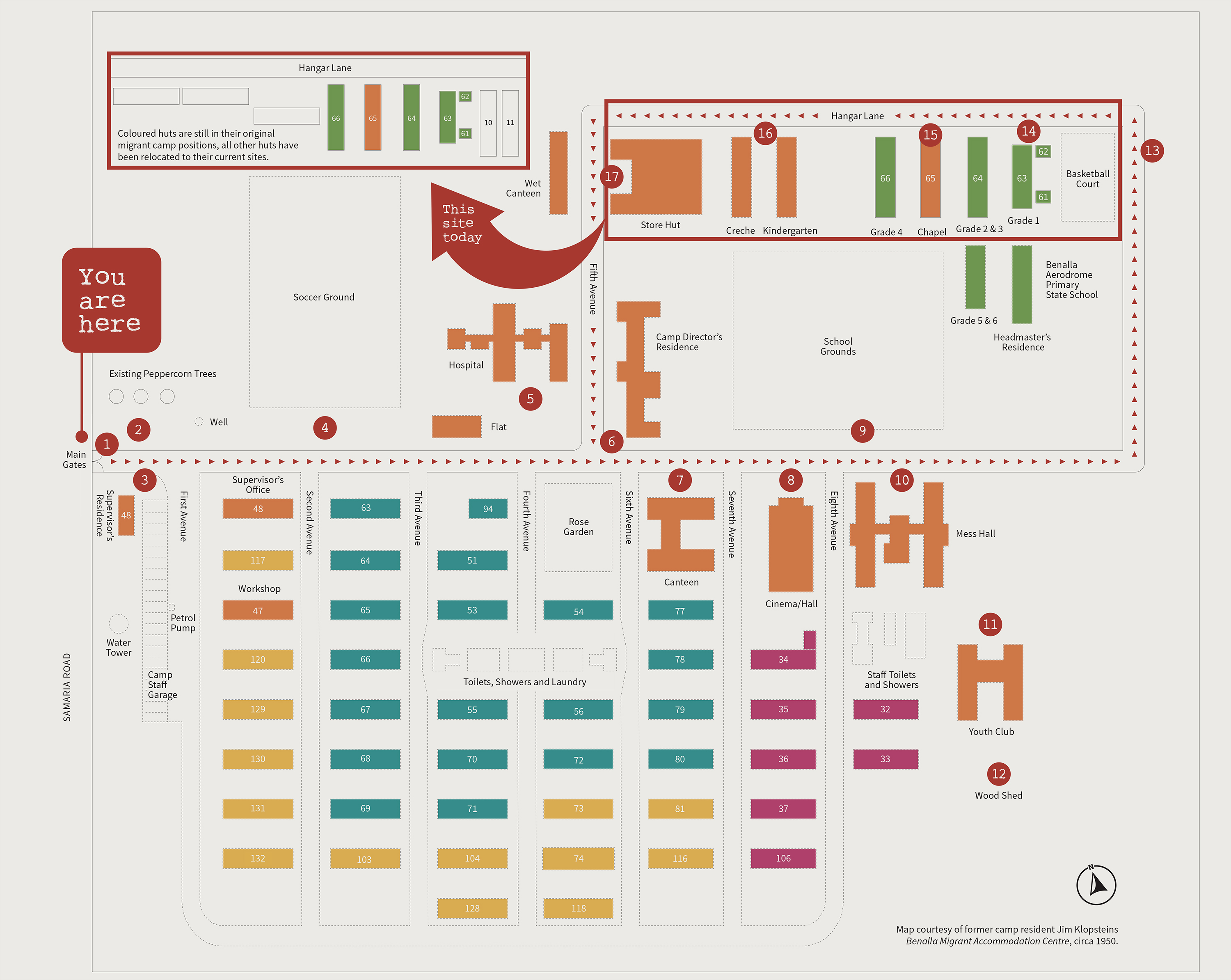 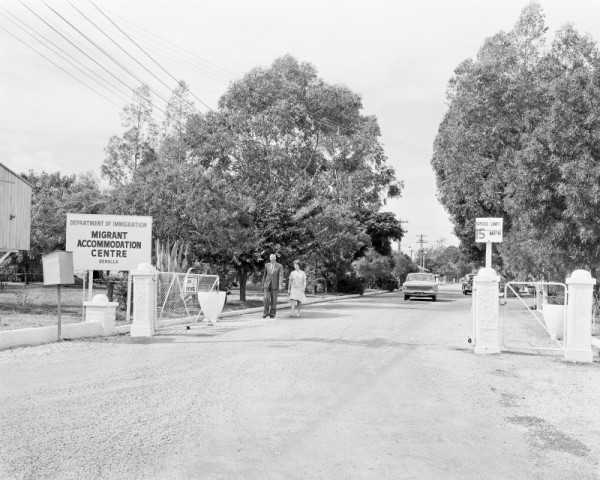 Four white concrete posts are what remain of the main entrance to the Benalla Migrant Camp today. About 60,000 European migrants entered through these gates in its 18 years of operation.

For most migrants Bonegilla Migrant Centre was their point of registration in Australia. From Bonegilla most travelled to Benalla by train and arrived at these gates on foot unless someone from the camp administration had been asked to pick them up. John Hanlon, a local, told me he was fascinated by the foreign-looking people in strange clothes getting off the train and walking with their suitcases along Carrier Street and Bridge Street on their way here.

Because the camp was administered by the Immigration Department, the grounds were Commonwealth property and different rules applied. The gate was patrolled and one could only enter with permission. 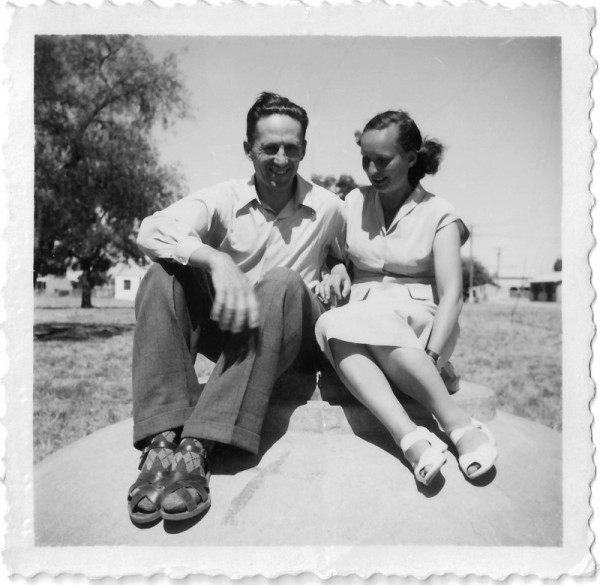 On the left hand side of the camp's main street is a camp landmark: the domed concrete well cover that was used as a photo point, with people either sitting on it or standing next to it. Behind it are the peppercorn trees that also date back to the migrant camp days. Both are mentioned in the State Heritage Listing as significant objects. 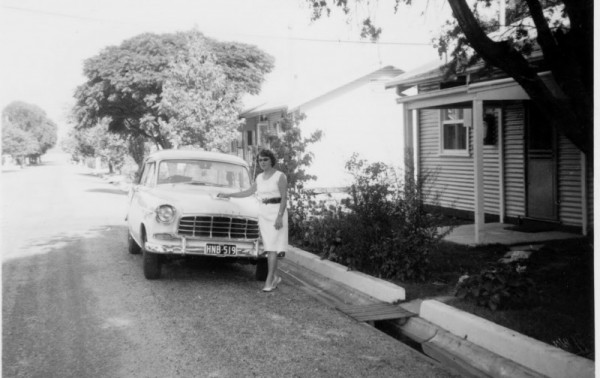 This hut was the go-to point for anything to do with the camp administration – maintenance requests or queries. It was also the first stop for newcomers to the camp. Here migrants completed their paperwork and were allocated a room. Larger family groups were often split up, as every room in a hut only housed two people and it was rare for several adjoining rooms to be vacant at the same time. At Bonegilla, before arriving here, migrants were matched with Benalla employers. The camp supervisor would inform migrants upon arrival about arrangements that had been made with their employer. 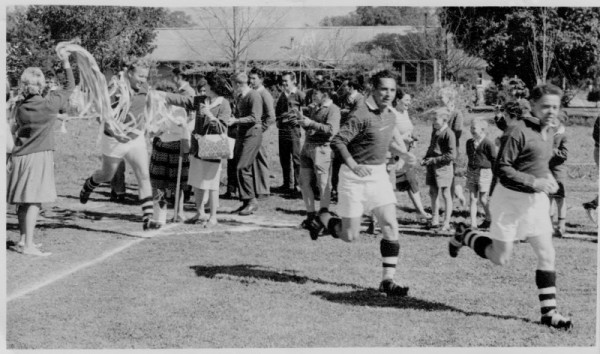 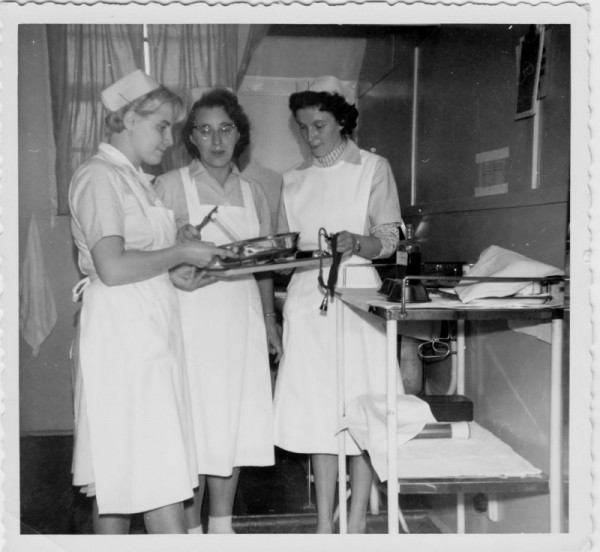 Complicated cases went to the Benalla Bush Nursing Hospital across the road from the camp. Dr Alexander remembered a small number of beds – maybe eight. When his work at the camp required him to do a “house call”, he had to enter via the main camp gates to be let in by the guards – something they "were not too fond of doing after hours". 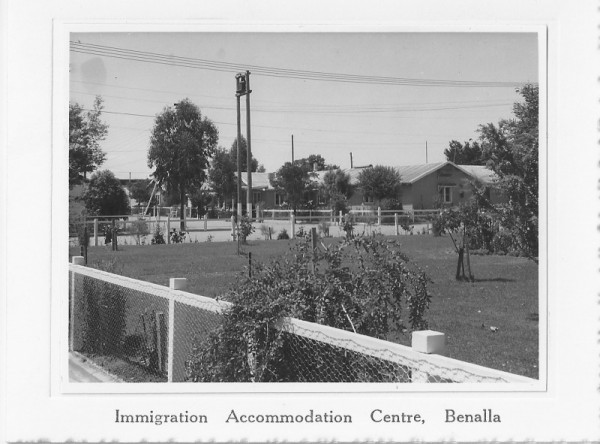 The Camp Director was the Department of Immigration appointed head of the camp. His residence and adjoining office were where rent was payable and where outside mail was delivered to, and in turn collected by the migrants. It is also likely that migrant camp duty rosters were displayed here - for wood yard or kitchen duty for example. 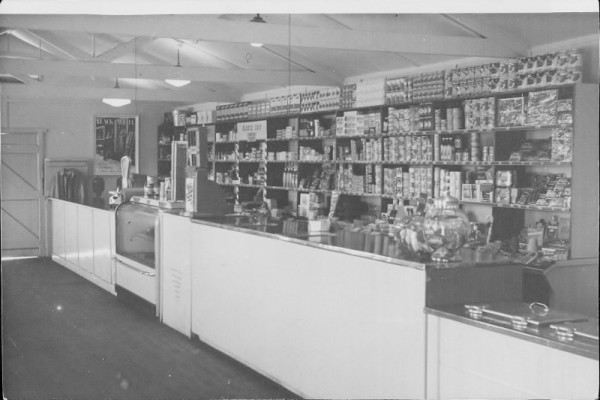 For some time Enno (Bob) Varnik ran the shop at the camp and kept the migrant camp residents supplied with basics such as cigarettes, sweets and ice creams but also pickled gherkins, salami, pumpernickel and other special foods they craved. 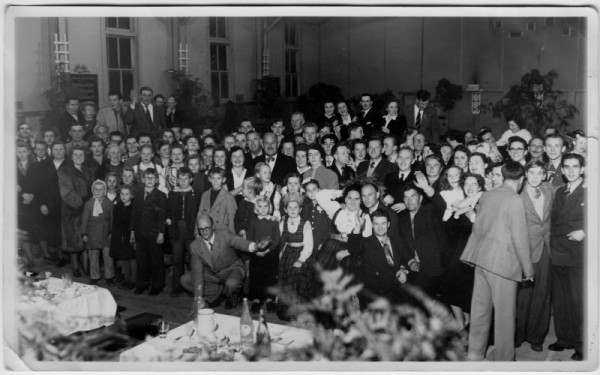 Many migrant families remember the main hall as the focal point of this camp community. It was where dances and special functions were held, and in the early years (late 40s and early 50s) European bands travelled from Bonegilla to perform at dances. The hall’s annual New Year’s Eve function was also open to townsfolk and extremely popular; tickets were very hard to come by. Our photos show that the hall was used for cultural dance performances (particularly Polish) and plays as well. Christmas parties where children met Santa and received a gift are also remembered to have taken place here. The hall held up to 500 people. In the 1960s the hall also functioned as a cinema with movies shown on weekends. 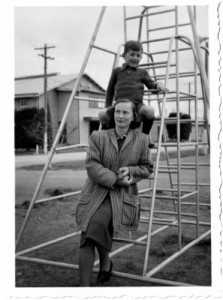 There was a small playground with swings, monkey bars, a slide and other climbing equipment. Beyond the playground was a large well-kept lawn area – the primary school grounds. From here you would have a vista of the school buildings, clustered together in the far corner of the camp. 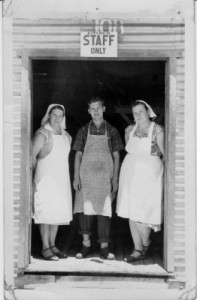 Camp huts had no facilities for cooking so this mess hall was where migrants exchanged their meal tickets for food. Most migrants did mandatory rostered duty in either the kitchen or the serving/ dining area. Migrants universally describe the food as very basic. Over the years the food must have improved somewhat; however, many migrants remember collecting their food and “improving it” on kerosene cookers in the huts, using herbs and spices, field mushrooms, fried onions and garlic. Food for staff was decidedly better in quality and more plentiful, and perhaps this was the reason why so many migrants aspired to work as camp staff. 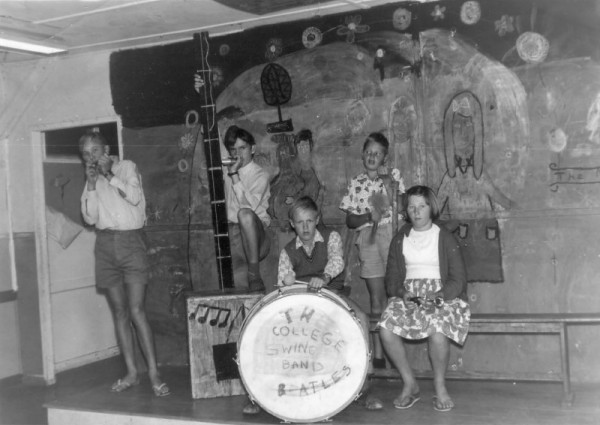 Many of the residents lived at Benalla Migrant Camp for years (up to 18) and, as a result, children who were born at the camp also came of age here. In the 1960s, Guido van der Staal was employed to run programs in an effort to keep the camp's cohort of teenage children occupied and out of mischief. Music programs, drama performances, outside play and chess were all part of the activities he documented for us with his photos. Those who remember the Youth Club (including a Boys Club) say they loved being there. 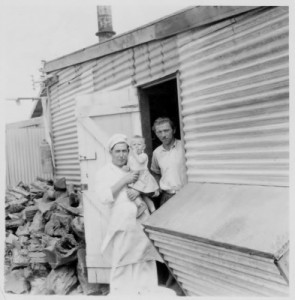 Every male migrant was rostered to do duty at the wood heap. Wood needed chopping to heat the boilers, which in turn delivered the hot water to the camp amenities/shower blocks and to the laundry. Behind the wood heap was an exit point to Kilfeera Road. Here a Polish-Jewish man would come one day per week, selling foods to the migrants from his little van stocked with delicatessen items from the Melbourne Markets. Kilfeera Road was also where the small number of migrants who owned cars parked, because there was no space inside the camp itself.

Behind Hut 11 is the rear boundary of the former camp, where the airfield began and a control tower stood. A number of photos were taken from the control tower, looking back at the camp. The featured photo shows the only remnant group of four camp buildings (and two school toilet blocks) which still stand in their original position today. The remnants of the asphalt basketball court can still be recognised today, partly underneath Hut 11.

These two highly significant huts are the only two camp school buildings anywhere in Australia, to remain standing. They are two of five school rooms that made up the Benalla Aerodrome State School SS 4651. The school opened on 16th November 1949 when the Department of Immigration provided four huts on this site to the Department of Education – one to be used as a dwelling for the head teacher and the other three, each partitioned, for classrooms. Assistant teachers had single rooms and ate their meals with the camp administrative staff. Enrolment as at 9th July 1951 was 174 pupils. An additional army hut was added the same year. On 11th September 1963 Benalla East Primary School began to cater for the children of the camp and the camp school formally closed. The school buildings were also used for Adult English language classes at night. 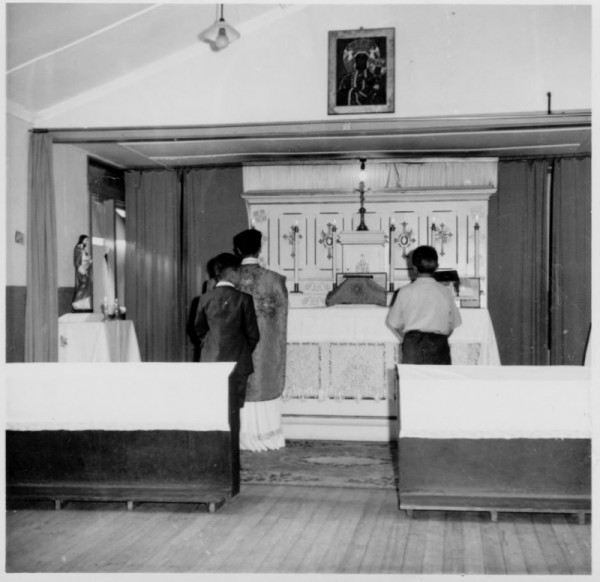 Hut 65 was a significant hut, serving the Benalla Migrant Camp community as its place of worship for the entire life of the camp, 18 years. The chapel was used by all denominations - our historic photos show it decorated for Russian Orthodox, Protestant and Catholic religious services. However, for the Catholic Polish community in particular, the chapel was a place of solace from the memories of war and displacement and the many challenges of starting a new life in Australia. A Polish priest, Fr Feliks Wozniczek celebrated a Polish Mass at the camp each week. Fr Wozniczek was attached to St Joseph’s Parish but stayed at the camp among the migrants for a number of years. The sacristy and the priest’s rooms are still recognisable at the rear of this hut. Migrant women used to decorate the altar depending on the occasion. 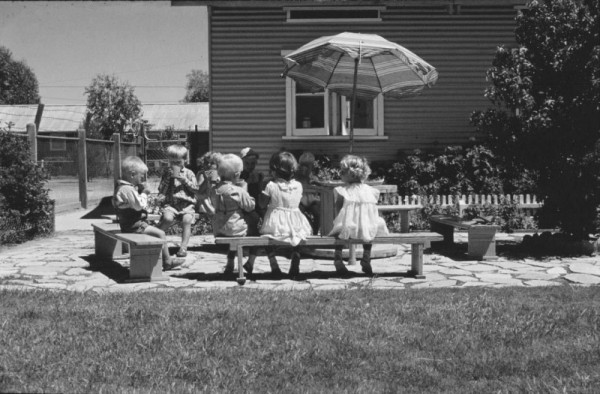 The Benalla camp was specifically suitable for hard-to-place migrants, single mothers, widows, and wives who were separated from their husbands as part of their two-year work obligation to the Australian Government. At any one time about a third of the camp residents were made up of supporting mothers. This hut provided 24-hour childcare to the children of migrant mothers without a breadwinner, so they could work at the nearby factories, Latoof and Callil (clothing) and Renold Chains. 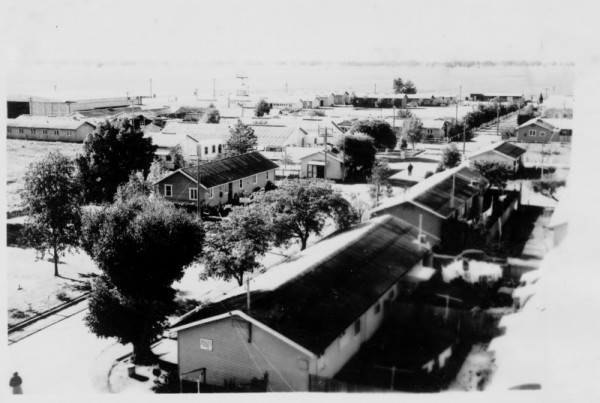 At this place stood the store hut with camp supplies. This is where camp residents came to collect their weekly change of towels and bed linen. All the camp roads were called by numbers: First Avenue, Second Avenue, Third Avenue etc. The store was on Fifth Avenue.