WHY THE DECISION TO COME TO AUSTRALIA:

Our parents & another family ie Bachmann from our hometown of Neunkirchen had friends by the name of Krenauer from our town of Neunkirchen in Austria who had migrated 2 years earlier to Australia & lived in Benalla. Mr/Mrs Krenauer wrote regularly informing of better weather, the life style & how they could actually get somewhere with the money they earned compared to Neunkirchen Austria Post World War 2. Thereby ensuring a better lifestyle for themselves & especially for their children.

Thus my parents decided to apply coming to Australia. Another factor was, even though World War 2 was over, there was always unrest in nearby (by Australian standards) countries & thus a fear of possibly becoming involved in another war. This was a duplicate fear because if that would occur both my father & brother would be involved & Mama could not bear that.

HOW DID YOU TRAVEL? MEMORIES OF THE JOURNEY?

When And Where Did You Arrive In Australia? We arrived at Melbourne’s Station Pier around the 19th?.Sep 1960. Mr Krenauer was there to greet us.

Memories of arriving in Australia: First impressions – Huge mass of land with seas surrounding it. The sea journey from Freemantle Perth took approx 5 to 9 days before arriving in Melbourne. Then the long journey by train from Melbourne to Bonegilla which took hours. The countryside was huge & barren & what seemed to European standards quite underutilized. We only spent approx 1 week at Bonegilla before a German speaking man (staff member) drove us from Bonegilla in a combi van/station wagon to Benalla Migrant Centre where my parents & brother quickly got work at the Reynold Chain Factory & there made lifelong friends.

Arriving at Benalla and the Migrant Camp – memories – Apart from the food which was like Bonegillas ie mostly mutton which none of the Europeans liked the smell of let alone taste, it became home to us for approx 2 ½ years. The huts were extremely hot in summer & very cold in winter.

From when to when did you stay at Benalla Migrant Camp – We arrived toward the end of Sep 1960 & left approx beginning/middle of Mar 1963.

Living at the Camp – the accommodation – Positives = it was the first time in our family’s lives that we had individual rooms. They were all in a row from right to left. My brother had his own room, my parents had their own room & my sister & I had our own room, which were connected by internal doors. It became more like home once our ship luggage arrived with curtains & photos etc.

Where did you work? (Assisted Migrant Scheme Work Contract?) – My father, mother & brother all worked at Benalla Reynold Chain Factory. My father told me years later that the machines they worked on there were actually the same types they worked on in our home town of Neunkirchen Austria. When Neunkirchen upgraded their machines the original ones were sold to England & it seemed possibly to Australia.

The food at the migrant camp – as per above ‘Arriving at Benalla Migrant Camp – memories’. It was the main reason why we moved out of Benalla Camp as soon as possible because we did not like to smell or let alone eat the mutton in the Camps Kitchen or in our rooms. Mama would spend lots of money to buy something in town which was more palatable to our taste. Therefore spending twice the money on food – the Mutton from Camp versus the shops (possibly delicatessen if there was such a thing in those days) in Town.

The accommodation and facilities at the camp – schools, churches, big hall.

Traditions/Family Celebrations – which did you have at the camp – any memories – My parents & my brother were involved in things like New Years Eve Celebrations. My parents were social people & enjoyed company, sport ie soccer, music, jokes, card games, outings etc. They quickly & easily made friends & joined in with like minded people from similar cultures & language. Their groups of friendships increased even faster & varied once we moved into town.

Music and Culture – My Papa bought an old (2nd hand?) Record Player with inbuilt Radio plus record bought at same time. We loved to play records on that. But my sister & I were not allowed to touch or use it in case we scratched the records or broke the needles. My brother however was & with part of his wage started buying 45s & LPs which helped him to learn English. He was a very good looking young man who loved music & dancing & still does as all the family did & do, he was quite popular.

Social Events at the camp - Apart from the big Hall that was at the Camp I think the individuals organized their own get-togethers.

School and Learning English – I liked school at Benalla Camp it seemed much more relaxed then in my school in Neunkirchen Austria. I especially remember fondly that the headmaster took our class out into the schoolyard & asked us to draw one of the big gumtrees. How clever of him, what better way of appreciating the difference in trees between our homeland & the ones in Australia.

During our school play times/recess some of the girls would sit near geranium plants which grew in many different colours, we would pick their individual petals stuck them on our wet fingernails making them look like we were wearing nail polish.

I liked school so much that I sometimes went to night classes at the Camps school with my Mama & where the adults used the classrooms to learn English by instructors. My parents were pretty good at learning languages although my Papa did not get as many opportunities to go to night school because he’d have nightshift work.

Rules to obey at the camp - I was unaware of rules.

Worst experiences at the Camp was overcrowding, effecting food problems eg at times meals were served up complete with maggots, & even with fingernails in them at times. Mama wasted no time in throwing out bad food where it belonged ie into rubbish bins. Another time there was an outbreak of lice/flees in mattresses. Again she was proactive & immediately threw mattresses out of the rooms onto the dirt ground leaning them up against the huts outside of our rooms & made lots of noise to Management about it. She certainly made her feelings known & didn’t hold back.

Prominent people in the camp (names and their role/job - memories of things they did) – personally I was unaware of that as a child. Except for our teacher/s who of course were prominent in childrens lives.

Benalla people – relationships and friendships – Our families made lifelong friends from our Camp days. Families like the Farkens, Venkort, Gaugg, Mazurek, Kerekis, etc etc etc . Families of all backgrounds & countries even though most could not speak English in the beginning & then for a while only broken English but they all got on well.

The countryside around the camp – how did you find it compared to the home country – Vast, sparce, dry, barron & underutilized compared to European standards.

Finding a place to live and moving out of the Camp – Due to the problems mentioned under the heading of ‘Worst Experiences at the Camp’ which caused my parents money outlay of food to be doubled not only at the worst of times but also at the best as per type of food ie mutton on a virtual daily basis that we couldn’t even smell let alone eat.

Whilst living at the Camp my sister Evi regularly suffered from tonsillitis which progressively became worse so during the 1st or 2nd year of Camp needed to have a tonsilectomy & adenoids removed. That was extremely stressful for my Mama.

Secondhand Bicycle - Parents bought a second hand bicycle so Mama could come check on my sister & I during her Reynold Chains Factory lunch break.

Mail from Austria – The most eagerly awaited thing we looked forward to on a daily basis. News from home! Mama was a prolific letter writer, was extremely homesick & cried bucketloads of tears when reading or writing. My brother corresponded with his girlfriend Agathe in Vienna. I sometimes wrote to my cousin in Austria. So all 3 of us looked forward to the dail mail however Mama was the most homesick for a long time, things improved somewhat once we moved into our new Commission House at 56 Faithfull Street in Mar 1963. That same year my brother married Barbara Pawlowicz & soon after became the proud parents of their first borne son – Freddy. Both my sister & I attended Clarke Street Primary School when it was quite new ie it only had 4 classrooms & 4 teachers. We were their newest migrant students at the school. My parents travelled the 3 miles to & from work on a daily basis on their bicycles in all types of weather until a few years later when Papa bought an old Zephyr 6 car which protected them from the elements during their daily work commuting & driving for pleasure during the weekends. I actually learnt to drive in that car in the Reef Hills. We had it for a few years & Papa was even brave enough to drive to Melbourne to visit our Krenauer & Bachmann (our 2 original) Neunkirchen family friends after they’d moved there from Benalla & Bonegilla . I would proudly sit beside him in the front passenger seat being his navigator driving from Benalla to places like Mentone & Yarraville in Melbourne who migrated from our home town of Neunkirchen at the same time as we did & were on the same ship the Roma. I still keep in close regular contact with these 2 special families in our lives.

A funny story regarding these 3 families is as follows – When we arrived in Melbourne Station Pier & Mr Krenauer met both my Hummel family there & the Bachmann family he took both my Papa & Bachmanns Papa for their first taste of an Australian Beer, but it became a stressful situation when both their wives & children were loaded onto the train to Bonegilla without both their husband & fathers who were late getting back. Mr Krenauer quickly hopped into his car with both our Papas & luckily caught up to us at Seymour. But all 3 men must have been in the bad books for a while at least.

Seasickness on the ‘Roma ship’. My sister Evi & I were the first to suffer from seasickness, we’d barely left Italian dock when during a meal we became unwell. Our Mama quickly left the meal area with us & we barely made it to the handbasins in the corridor – we weren’t the only ones. During the next few days Papa spent his time in our section of the ship handing the buckets alternatively to Mama Evi & I – he certainly was kept busy. Rudi had episodes of feeding the fish, whenever he started feeling squeamish he’d go outside hold onto the ships rails & kicked with both legs to get every last ounce of food out of his system - that’s what I call doing your bit for the environment. On the ‘Roma’ ship families were segregated ie mothers & children in one area & husbands & boys eg my brothers age in another. But when my Mama suffered sea sickness to the extreme she was admitted to the ships hospital & whilst there my sister & I moved into my our fathers & brothers section. I do not know how long she was in hospital for but do know she’d lost a lot of weight in the process. 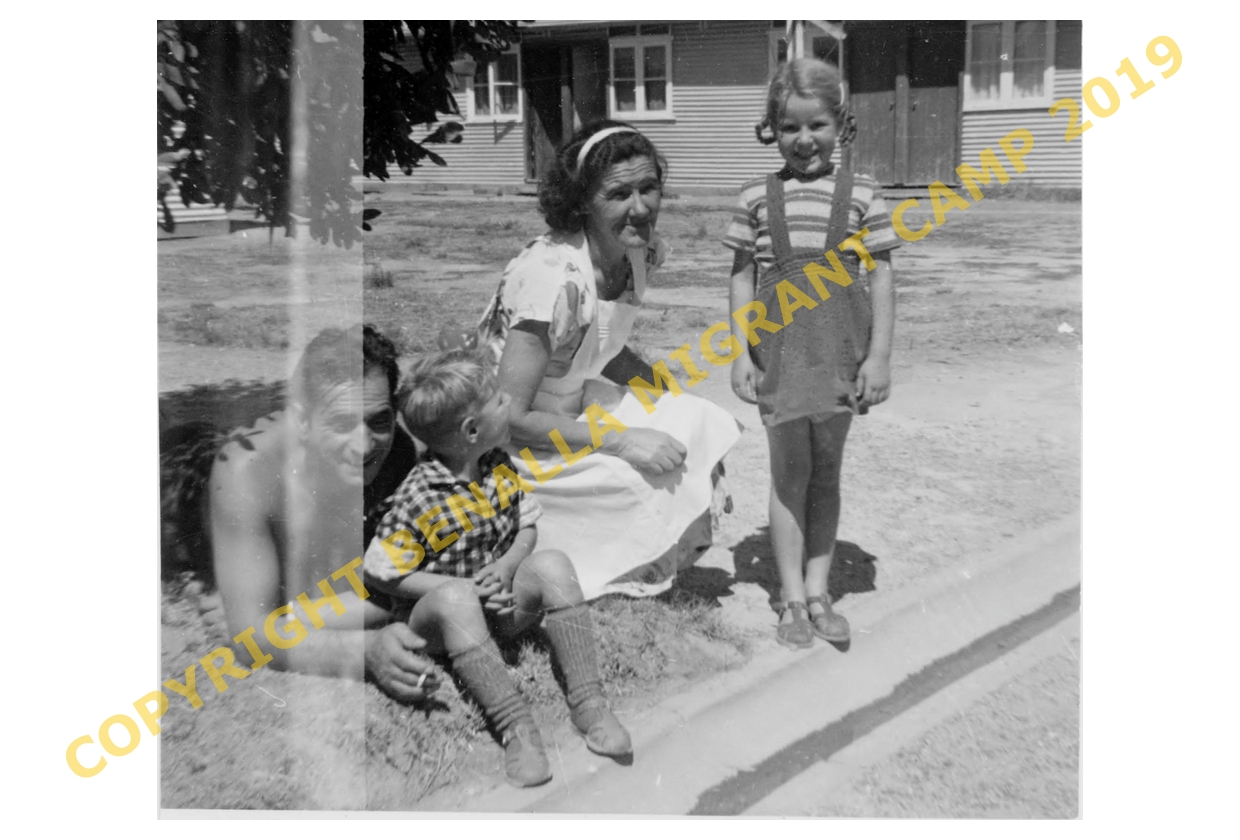 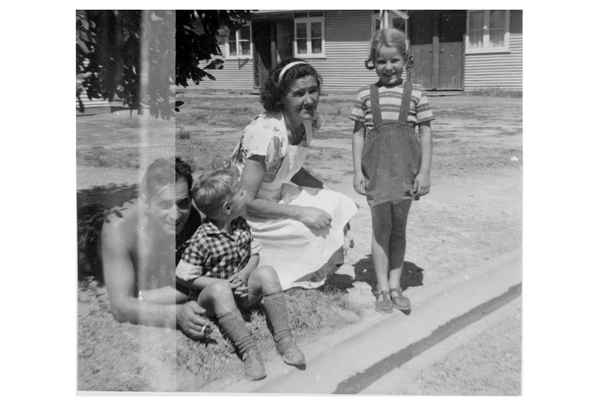 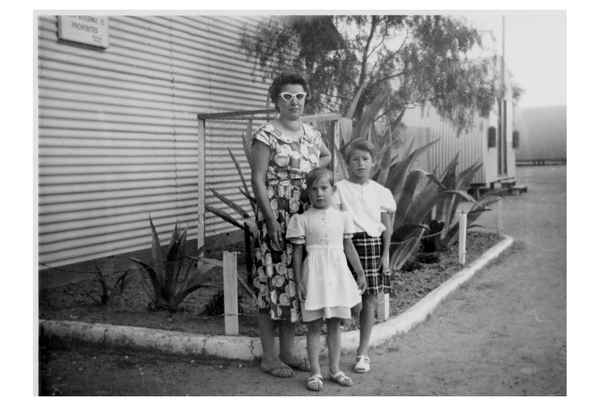 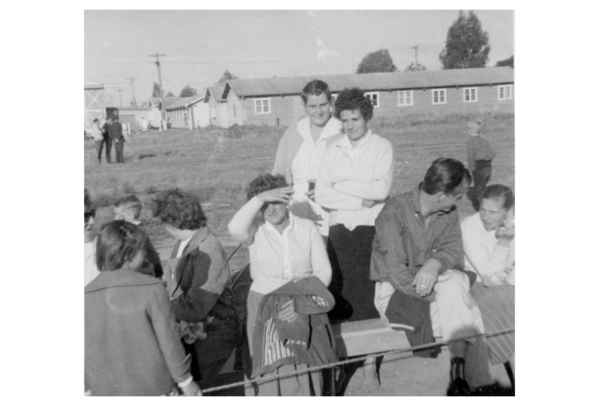 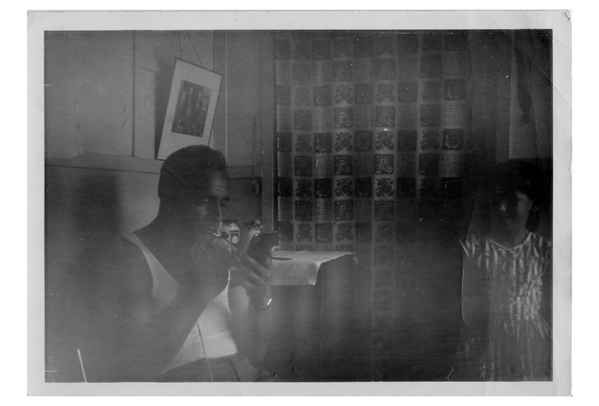 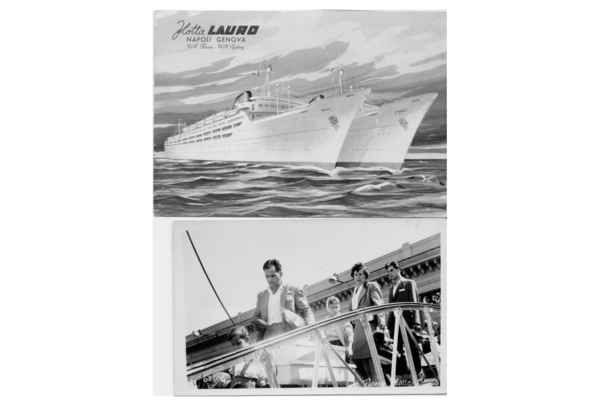 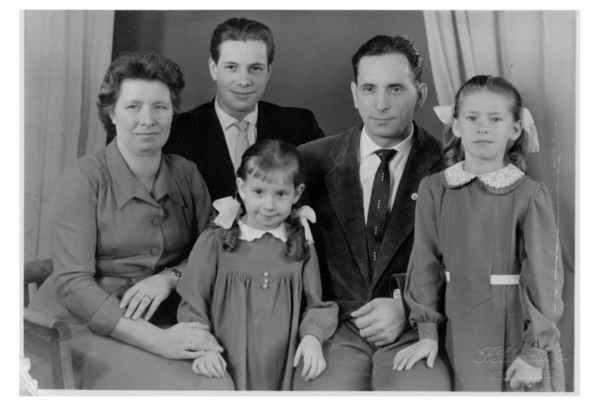 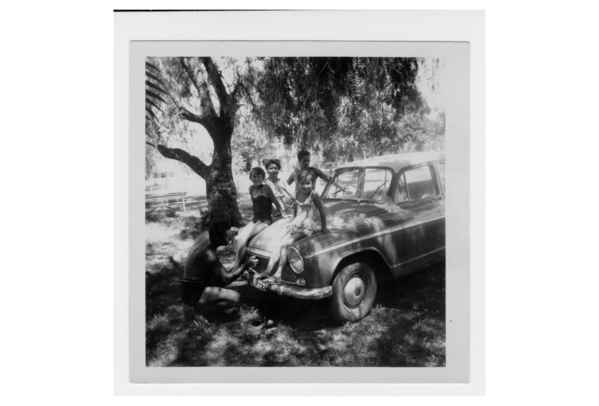 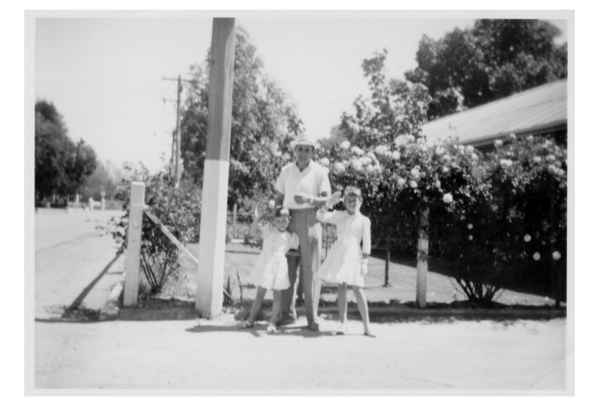 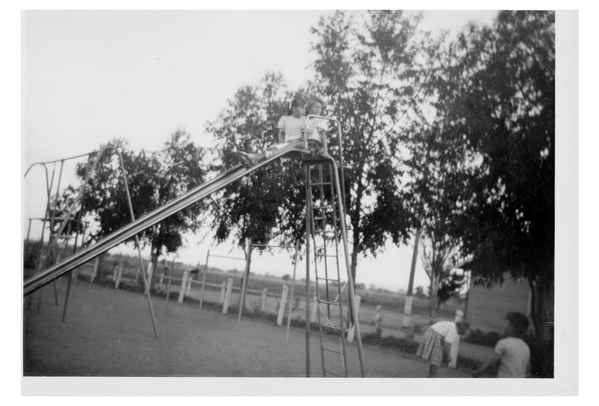 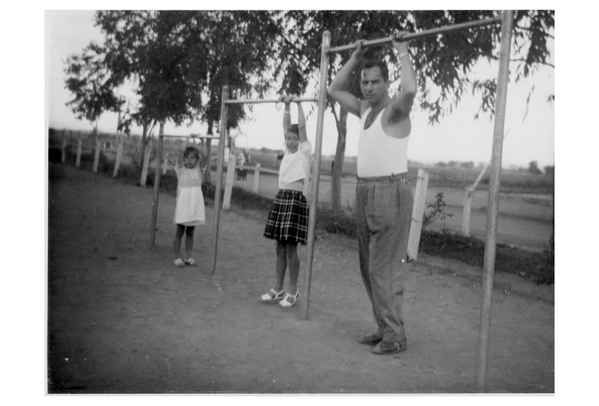 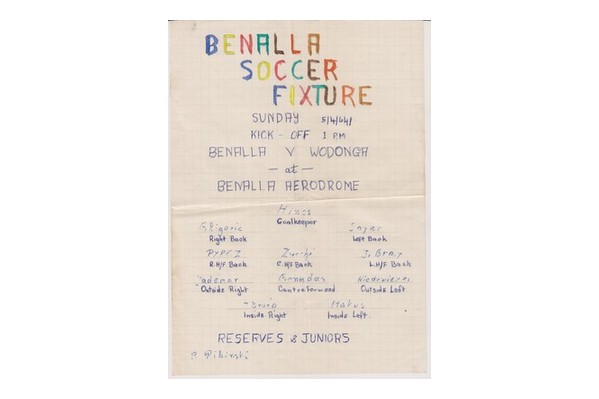 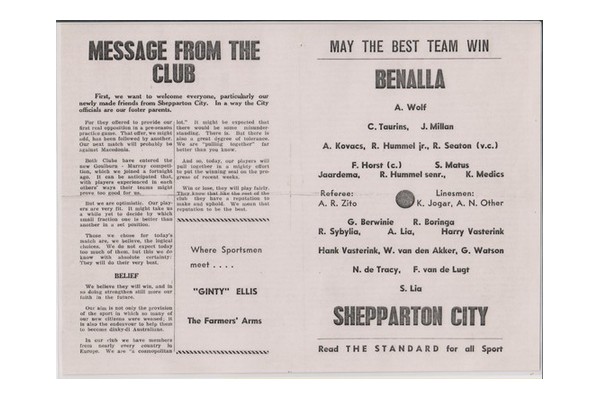 Records in Benalla Cemetery for HUMMEL